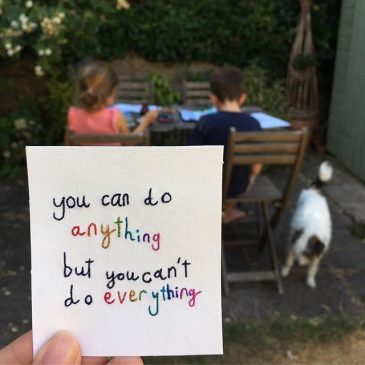 The school holidays are almost upon us. If you’re a working parent it can be a particularly tricky time, especially when you are trying to run a small business. You’re pulled in so many directions – having worked so hard throughout the year you have to slow down or stop for at least six weeks … or try to keep things running and feel increasingly frazzled. Each summer my over-riding feeling is that of guilt; guilt that I’m not doing enough fun things, guilt that I’m having to think of ways to snatch an hour or two here and there rather than enjoy the time I have with my kids, guilt that there is too much time being spent looking at screens, guilt that I’m not doing anything well enough. .
We’ve probably all seen *that* reminder doing the rounds too, you only have 18 summers … just to compound that guilt a little further. And of course it’s true, we must enjoy time with our children while they are small. But I also think that showing children that money comes from somewhere is a pretty important life lesson. It probably won’t kill my kids to have some screen time while I sew (who am I kidding, they will love it) and actually they usually love ‘helping’ too. It also won’t be the end of the world If I don’t post quite so often. The only thing that is unwise is beating myself up for not being able to do everything. Nobody can do everything. So I’m approaching this week, and this holiday, trying to keep this at the front of my mind. And I hope that if any of this sounds familiar, then that’s what you’ll try to do too. .
Have a lovely week. Emma xx
.
.
.
Quote by David Allen.
Stitched by Emma Giacalone.
Written by Amélie Giacalone (see, I’m setting her to work already)
.
#mondaymotivation #motivationalmonday #guiltfree #youcandoanything #youcantdoevrything #AurifilArtisan #aurifil #aurifilthread #creativelife #creativehappylife #creativitywithmeaning #calledtobecreative #designalifeyoulove #textileart #freehandmachineembroidery #freemotionembroidery #embroideryart #stitchersofinstagram #everystitchcounts #threadart #threadpainting #stitchersofinstagram #communityovercompetition #makeitsewcial #sewersofinstagram #sewcialist #ihavethisthingwithsewing… Read More 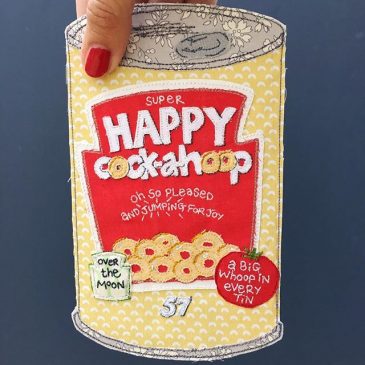 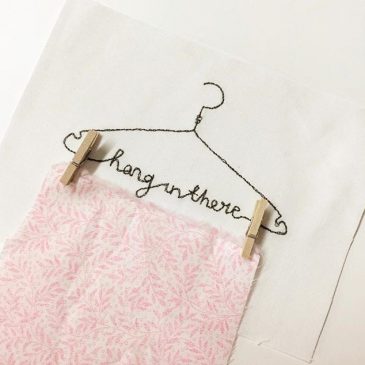 I’m being super-brave today (if I do say so myself) and driving to a workshop ..Which might not sound that big of a deal, but I get ocular migraines and always panic about getting one while I’m driving …that and I also just don’t like driving that much. But I’ve decided to be brave and do it anyway! I’m not exactly looking forward to it, but living in a semi-rural town I realised how small life could become if I’m not able to hop in the car and go somewhere more exciting (and I’m feeling the need to do a bit more of that!) What do you do to push yourself out of your comfort zone? .
This is also a #tbt to my very first motivational Monday post .. can you believe it’s nearly been a year I’ve been making them now?! Have great day, and hang in there – it’s almost Friday. Emma xx
.
.
#AurifilArtisan #aurifil #aurifilthread #creativelife #creativehappylife #creativitywithmeaning #calledtobecreative #designalifeyoulove #textileart #freehandmachineembroidery #freemotionembroidery #embroideryart #stitchersofinstagram #everystitchcounts #threadart #threadpainting #stitchersofinstagram #communityovercompetition #makeitsewcial #sewersofinstagram #sewcialist #keepgoing #hanginthere #nearlytheweekend… Read More 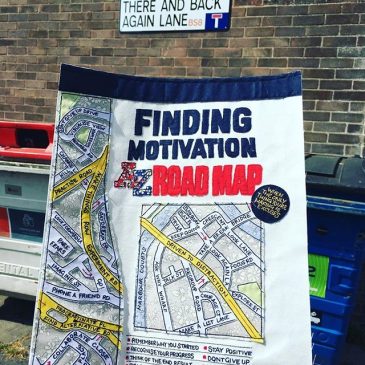 There and back again Lane
.
I was determined to include There and back again lane on to this map (When I was a child, whenever we went out in the car and my brother or I asked where we were going, my Dad always used to say that’s where we were going!) and as I was passing yesterday and had it to hand, I decided to take a photo … at which point I realised I’d forgotten to stitch it on ? (the actual location on the map is the little side road just off of Reward Road – see if you can spot it! ) I’ll have to go back for another picture once I’ve stitched it on! (It would seem I have become that crazy lady that stands around in a street full of bins trying to get a photo)
.
Just another little reminder that I will be stitching another map at Bristol Museum next Thursday (19th) in the #MakeSpace attached to the Woman’s Hour Craft Prize exhibit
.
.
.
#AurifilArtisan #aurifil #aurifilthread #creativelife #creativehappylife #creativitywithmeaning #calledtobecreative #designalifeyoulove #textileart #freehandmachineembroidery #freemotionembroidery #embroideryart #stitchersofinstagram #everystitchcounts #threadart #threadpainting #stitchersofinstagram #communityovercompetition #makeitsewcial #sewersofinstagram #sewcialist #ihavethisthingwithsewing #thereandbackagainlane #findingmotivation #atoz #bristolmuseums… Read More 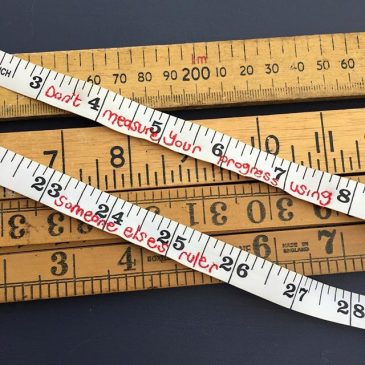 Don’t measure your progress using some else’s ruler
.
We are all aware of the perils of flicking through these little squares of other people’s lives and businesses on social media; we know it’s not altogether real, and that we shouldn’t compare our daily lives to the perfectly edited snapshots that other people present . Yet it’s still so easy to do
.
Other people have better ideas, are making more, getting out there more, selling more, doing more. It can be easy to feel like everyone else is just …more. But when we compare, we don’t see all the edited bits. We have no idea which side of the tape measure someone else is using. We put all of our focus in the wrong place and on the wrong person, and spend all of our precious energy on someone else. Nobody has that much time in their day
.
So I now have a handy reminder on my desk not to use my own ruler … or inch tape (also serving as a reminder that stitching on to tape measures are a once tried, not to be repeated experience!)
.
Have a happy – comparison free – week. Emma xx
.
.
.
#mondaymotivation #motivationalmonday #dontcompare #comparisonfree #AurifilArtisan #aurifil #aurifilthread #creativelife #creativehappylife #creativitywithmeaning #calledtobecreative #designalifeyoulove #textileart #freehandmachineembroidery #freemotionembroidery #embroideryart #stitchersofinstagram #everystitchcounts #threadart #threadpainting #stitchersofinstagram #communityovercompetition #makeitsewcial #sewersofinstagram #sewcialist #ihavethisthingwithsewing #tapemeasure #smallandmightybusiness… Read More 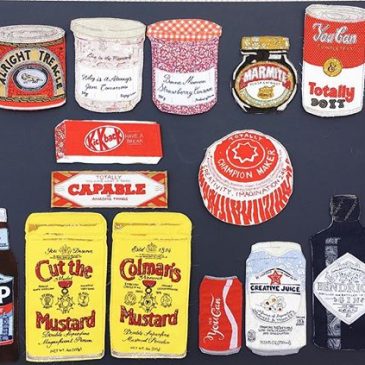 I’ve never thought to put all of my food pictures together before, but I’ve got quite the collection building up now!
.
Earlier in the year I asked you lovely lot for some advice on how to exhibit my work .. the resounding feedback was that I needed to build up a bit more of a body of work, and also that I needed to choose a few themes or collections of work to build up (all great advice!) which is what I went away and did!
.
So now I’ve ended up with nearly 20 food pictures (some literal and some tweaked) and the next thing I need to do is get them somewhere other than my workshop (which is starting to resemble a mini market) .
So I’m looking for more advice, and this time it’s where. Can you think of the perfect place to display these? Do you have the perfect space to show them? I’d really appreciate any ideas!
.
Hope you’re having a lovely weekend. Emma xx
.
PS a lot of these are available as prints and cards on my website and more will be coming soon #justacard .
.
.
#AurifilArtisan #aurifil #aurifilthread #creativelife #creativehappylife #creativitywithmeaning #calledtobecreative #designalifeyoulove #textileart #freehandmachineembroidery #freemotionembroidery #embroideryart #stitchersofinstagram #everystitchcounts #threadart #threadpainting #stitchersofinstagram #communityovercompetition #makeitsewcial #sewersofinstagram #sewcialist #ihavethisthingwithsewing… Read More 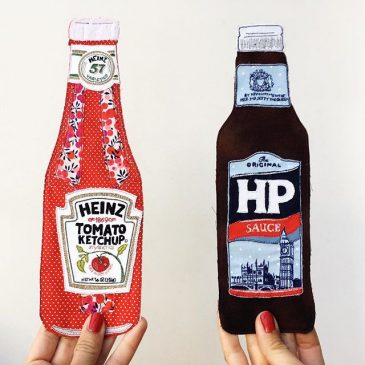 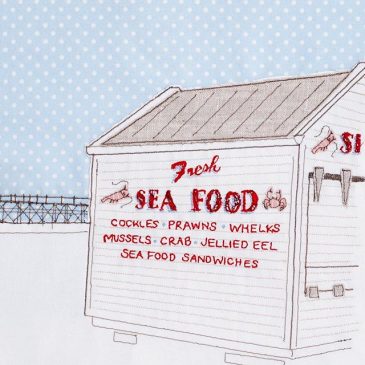 I’m back and ready to start stitching! There will be a new foodie picture tomorrow, but meanwhile here’s a #tbt of a beach slightly closer to home
.
I made my seaside series of pictures last summer and this one is quite special to me as it was one of the first pictures I had made where I attempted stitchy calligraphy (the fresh seafood bit) but this planted a seed of interest and started me thinking about making my hendricks picture (although it would be a few months before I was brave enough to attempt it!) which set me off on a new and exciting path
.
That, and I love that little hut! .
Happy Thursday ??????
.
.
.
#AurifilArtisan #aurifil #aurifilthread #creativelife #creativehappylife #creativitywithmeaning #calledtobecreative #designalifeyoulove #textileart #freehandmachineembroidery #freemotionembroidery #embroideryart #stitchersofinstagram #everystitchcounts #threadart #threadpainting #stitchersofinstagram #communityovercompetition #makeitsewcial #sewersofinstagram #sewcialist #ihavethisthingwithsewing #createyourownpath #bythesea #seafoodhut #westonseafront #westonsupermare… Read More 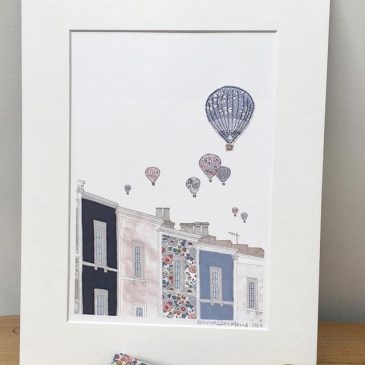 Pretty Bristol houses, beautiful Liberty print, hot air balloons … so many lovely things all in one picture, and a little reminder for me that heading home isn’t so bad!
.
This is available to buy as cards, A4 prints, embellished prints (with an extra hot air balloon embroidered on to the print) … and actually, I also since I’ve moved my workshop back to my house, i have the original that’s looking for a good home (drop me a DM if you’re interested if you’d like to save it from a life of being shut away in a cupboard – it’s about A0 size… I can measure if you’re interested!)
.
.
.
#AurifilArtisan #aurifil #aurifilthread #creativelife #creativehappylife #creativitywithmeaning #calledtobecreative #designalifeyoulove #textileart #freehandmachineembroidery #freemotionembroidery #embroideryart #stitchersofinstagram #everystitchcounts #threadart #threadpainting #stitchersofinstagram #communityovercompetition #makeitsewcial #sewersofinstagram #sewcialist #ihavethisthingwithsewing #libertyprintloveliness #bristolart #bristolballoons… Read More 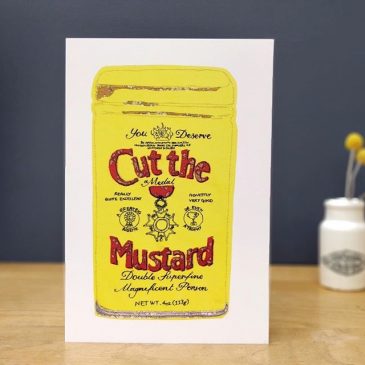